The Strange Fate of Kitty Easton 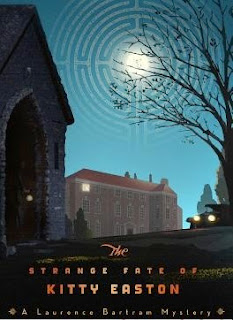 After finishing first book, The Return of Captain John Emmett, I was already craving this second book but knowing I would have to wait. Happily for me, the wait is over!

Unfortunately I barely remembered the characters although the main holdover is Laurence Bartram, Great War veteran and teacher with expertise in churches. He has been invited by a fellow veteran to visit the Easton estate to look at a church there that might have something pretty spectacular. As Laurence settles in, he discovers the terrible maze of secrets that threatens to overwhelm the inhabitants.

Most prominently featured is the mystery teased by the title: that of young Kitty Easton, heir to the estate who disappeared from her bed when she was five. No body was found and no trace of her has been seen. Her father died in France and her mother is a bundle of nerves caught in a debilitating disease who persists in believing in Kitty's continued life. But there are secrets everywhere: almost every resident of Easton Hall has something with key members of the surrounding village contributing their bits. Past residents leave behind secrets and even the hall itself has some surprises in store.

The ability to piece together the many layers eluded me but for the most part I was content to sit back and wait. It is definitely not a fast-paced read, with sections that seemed to completely ignore the mystery of Kitty, to the point where I was afraid we wouldn't get any answers. However Speller did weave everything together into a satisfying package, making the payoff worth it for me; a less patient reader might not be able to wait though.

The book does pull of some moments of suspense, particularly an extended passage with Laurence and another character in a claustrophobic space reminiscent of his time in the trenches and bringing back dreadful memories. I was almost biting my nails (but not quite because I have kicked that habit) during that scene; it went on for hours in the book and I felt myself growing weary along with them and wondering how they could possible get out.

Throughout I felt a third book was being teased as Laurence contemplated decamping to Italy for an extended period of time. As Mussolini rises in regard, there will be an exciting historical backdrop to whatever mystery Speller concocts and I will definitely return!

Overall: I feel like this cover captures the manor house setting and mystery with its maze, all relevant to the events of the book.