7 Clues to Winning You 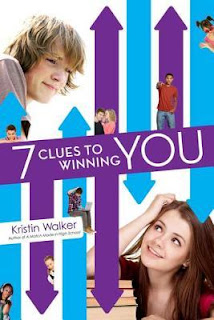 After loving A Match Made in High School, Walker's follow-up was highly anticipated. I remember loving her hilarious dialogue and especially some swoony romance. After glancing over my review just now, I discovered that I found some aspects of the book infuriating though and that is also the case here. I mean, some things were absolutely maddening to me.

But first, let's start with what worked for me. Main character Blythe (love that name; makes me think of the actress Blythe Danner) finds out that she has to change schools to finish out her junior year. I am immensely sympathetic to that because I had to move across country in the middle of tenth grade (in short: it sucked). Blythe is lucky that she is just moving a short distance away where she can still easily communicate with her old friends, providing they all make time for each other. But Blythe already has a reputation at that school. Her father is the principal (with superintendent ambitions which is why they're moving) and the previous year, someone had taken a picture that happened to catch her picking her nose, which was spread across the school and exposing her to much mockery.

In her first day at the school, Blythe is taunted and mocked, leading her to make a charge of bullying and getting the big scavenger hunt cancelled, earning even more invective from her peers. This section was a roller-coaster for me because of course I want to sympathize with the main character and we're inside her head so we see all of her rationale for her actions. But it also seems overwrought-she goes in to the school prepared to hate it and immediately jumps on anything that will make it hate her more.

Really Blythe exasperated me. I can see that she has a good heart and I admire her being put together and well-spoken. But so many times, I just wanted to shake her for being so bull-headed. Her family inspired similar reactions in me and her love interest didn't do much for me (I like that he's well-read (they flirt using Shakespeare after all) and he made me think of Scott from Meg Cabot's Teen Idol, which is my favorite Cabot contemp but I didn't love him).

However I loved, loved, loved the supporting characters. First there is Jenna and Cy, who seem like goth druggie bad kids but are actually super sweet and welcoming to Blythe. Then there is Ms. Eulalie and Ms. Franny who live in the retirement home where Blythe volunteers. They are ever-bickering but they love each other and provide important support and wisdom for Blythe in addition to being hilarious. These side characters were definitely my favorite parts and I can unreservedly express my love for them.

Overall: A whirlwind of emotions for me-this definitely hit some nerves and aggravated me but I couldn't bear to stop reading, needing to know how everything would be resolved.

Cover: I really hope that guy is not supposed to be Luke because the Luke of my imaginings is much hotter.