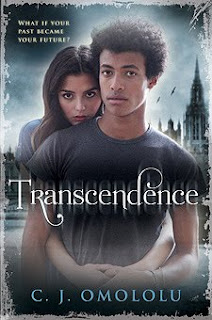 The part that grabbed my attention from the blurb was the promise London and reincarnation. While London is only the setting for a few early scenes, the reincarnation aspect plays a big role with the idea that there is a select group of people called the Akhet who can remember their past lives and use their accumulated wisdom for good.

Our main character Cole (which has been a male name in other books so the fact that she's female, Cole is short for Nicole, kept throwing me) is starting to remember pieces of former lives, most notably fainting at the Tower of London where she died in a previous life. She is rescued by Griffon, who recognizes her for what she is but despite her interest in him, no numbers are exchanged and they lose contact.

Fortunately though he was also just visiting England and the two reunite in the San Francisco area as Griffon explains more. Besides her beheading, Cole starts to remember a life as an Italian cellist touring who was entangled in a murder investigation. She also juggles suspicions about who she can trust: Griffon or a cello student, both who present convincing opposing tales. Who she chooses to believe could affect how long this life will be.

Besides the paranormal elements, Cole is a cello prodigy and as a violist, I always like books with musicians. It actually plays a fairly big role since Cole discovers that her previous stuff could play cello. Does she deserve all the praise she now gets when much of her talent stems from the fact that she also used to be able to play? I had never thought of it that way and it was interesting to think about.

Family is also present. Cole's parents are divorced but they share a house, with one on the top floor and the other on the ground. This means they are always around to butt into what Cole's doing or at least to try. Cole also has a sister who plays a role in setting Cole up with Griffon and who introduces her to some other people who may play a big role in later books. The sisters don't have the best relationship but I believe there are more levels to explore for the two.

Overall, I thought this book was a little hard to get into (with the mix of flashbacks and Cole's confusion) but once I was engaged, I flew through the book.

Cover: While I have repeatedly expressed my dislike of covers where the people stare out at you, I am kind of in shock that Griffon is on the cover. After reading Kate Hart's findings about YA covers in 2011, I know how rare that is. I hope sequel Fated's cover will be similar.