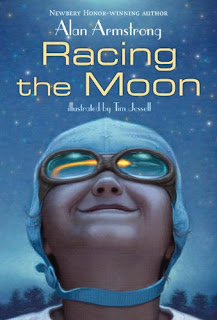 I requested this book on a whim after seeing that it was a historical novel, a genre close to my heart. I thought I saw something about a female main character with a love of adventure and dreams of the moon, which sounded different from my usual read.

Well, this ended up being kind of a weird read for me. There were a lot of threads and things I thought would be explored more but then weren't and things that were oddly brought in. For example, I had expected a story about young Alex following her dreams to learn about space travel in the year 1947. Instead it seemed to be more about her older brother Chuck, straightening out his life and receiving an amazing opportunity to join the space program after much talk about being adopted, actions made out of spite towards other, and multiple endangerments of Alex's life (more about that later). Then there is the exciting Captain Ebbs, who helped feed Europe after World War II and is working to create new space food for the astronauts. Her interest in the kids gives them the amazing opportunities they experience, including meeting the brilliant Wernher von Braun, a Nazi-scientist who defected to the US to continue his pursuit of knowledge. She also is a descendant of John Smith (he of Pocahontas fame to us Disney fans) and shares his journal about exploration with parallels to the work of the day's rocket scientists.

First things first, Alex clearly adored her older brother but I was frequently appalled by his behavior and what he modeled for her. He encouraged thievery, looking before you leap, and trespassing on federal grounds where they could easily have been shot! I can see where Alex sought adventure but I just wanted to shake some sense in to that boy. Additionally Captain Ebbs offered them friendship and guidance and they went behind her back as Chuck doggedly pursued only what he wanted. I could not believe the way he repaid her hospitality.

There wasn't much about von Braun, whose membership in the Nazi Party has been debated as well as his feelings about the slave labor utilized under that regime for his work. Did he join under coercion? Could he have done something to end the slave labor without sacrificing his own life? These questions aren't really debated but they are something I'm thinking about as I do my own research after the book. Similarly the excerpts from John Smith have inspired me to look for more since, as stated earlier, I am most familiar with him from the Disney film despite its questionable relationship to reality. I wish there had been an author's note talking more about these figures although some suggested reading is provided in the acknowledgements.

As I read back over what I have written, I see that expectations played a big role in my dissatisfaction. I thought there would be more of a focus on a young girl instead of an almost adult male. Alex was a sweet inquisitive kid so to see her do her own exploring instead of being Chuck's shadow would have been more to my taste. Furthermore, the book seemed a bit overpacked with both von Braun and Smith, whose sections did nothing for me. I feel like the story I got wanted to be a YA tale focusing exclusively on Chuck and bringing in more historical detail.

Overall: Expectations not met but could still be a great read for a more prepared reader as there is lots of adventure and excitement.

Cover: It definitely looks middle-grade to me, something about the close-up on the face.