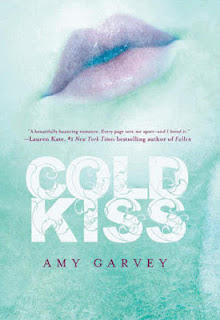 I was drawn in by the unusual cover but ended up delaying reading this after seeing that it was classified as paranormal, which is not my preferred genre. Not that I don't enjoy paranormals; I just tend to like contemporary and historical stories more. But after reading positive reviews from bloggers I didn't expect to like this book, I decided to check it out for myself.

It started out very promisingly with main character Wren so broken after the sudden death of her boyfriend Danny that she calls upon her extraordinary mysterious powers to bring him back to life where she keeps him hidden in her neighbor's garage. For a while, it seems okay. Wren gets Danny before and after school while drifting through the rest of the day in a fog. She has isolated herself from her best friends and her family but at least she has Danny. Except increasingly he is not her Danny but a Danny who is remembering the terrible night of his death and how he no longer belongs with Wren. And then a new guy arrives at school with his own powers and he discovers her secret, prompting her to clean up the gigantic mess she made.

This sounded different and the writing was very smooth and easy. I was able to move through the book fairly quickly. However while the beginning was good, I found myself liking the book less and less. Why? Several things. I was uncomfortable with Wren moving on with mysterious new guy so quickly while still entangled with Danny. It felt like cheating to me as Wren wanted her Danny in addition to this second guy. I also did not like the new guy, who seemed like a very convenient plot device to bring everything to a head while also giving Wren a new love interest.

Then Wren's mysterious powers are inherited from her mother but it is not something that is talked about. She does not call herself a witch although that seems to be the correct descriptor and it is all very hush-hush. I understand that there is a complicated history there but as a reader, I was disappointed with the information I received. The last problem I'll mention was just a general dislike for Wren. Besides what felt like cheating to me, there was just a general selfishness on her part and her overly self-reliant stance. She couldn't really handle everything and her refusal to recognize that drove me up the wall.

Overall: The more time I spent with Wren, the less I liked her although I ended the book with a lot of questions about her powers. Although there is a sequel, I do not anticipate picking it up unless pressured by many rave reviews.

Cover: Seems a little different from the usual (no girl in a pretty dress) and I love the blue-green which is shiny in person but the giant lips are creepy!