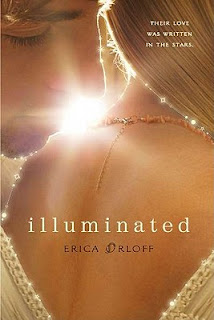 I remember seeing this book come out at the end of last year but since it was December, I feel like it got a bit overshadowed by end of the year wrap-ups and holiday times. So I never heard much about it but remained interested in the story based on the lovely cover.

When I read the summary, I was skeptical because it's supposed to be an epic love story against the tragic love story of Heloise and Abelard (wikipedia page if you're not familiar with it although by reading this book, you would get a pretty good basic understanding) and in my experience, I tend to find those kind of YA stories unpalatable and unable to live up to the mythical passionate society-defying love stories of the past. And well I would say I was right in this case but this book is not without its charms.

First it was a delight to read about history loving Callie who is spending the summer with her uncle while her father is off on business (her mother being deceased). While examining a manuscript for auction, they find a palimpsest and begin investigating its legitimacy eventually leading to the story of Abelard and Heloise as well as a trip to France.

Second, the inclusion of the story of Abelard and Heloise was great. Although I think it's a pretty famous story, it's not the most famous and I've never read a YA story incorporating it (unlike say Romeo and Juliet, which is also referenced on the back cover). The couple were separated in life until resuming a passionate letter correspondence, cementing their intellectual connection as their physical connection had already culminated in a son. There's an optimism around the story that made me smile.

What I ultimately found most interesting was Callie and August's fears stemming from their parents' many mistakes but choosing to still believe in themselves and their love. Neither set of parents is still together and toxic is a word that could describe both of those relationships. Callie only learns about the bitterness of her parents' relationship during the course of the book, adding a double whammy with its new revelations in addition to navigating her own romance. Both of the kids worry that they could repeat the mistakes, could hurt the other the way their parents hurt each other. But they take a leap of faith and pledge to each other, aiming for that kind of epic love.

As I said though, the love story isn't quite up to par. Callie and August fall almost immediately and seem to just know. I like seeing a couple fall for each other, the ways they complement each other like no else has; it's those details that really make a romance for me and in this case, the book doesn't meet my demands although I was not expecting it to be able to given the brevity of the novel.

Overall: A slight sweet love story-very fast-moving for a lazy afternoon but without a knockout emotional punch to really resonate.

Cover: I love the warm colors that feel very inviting and the stars along the outline of their skin (this made be a little hard to see in the picture but it can be seen on the cover in person.)