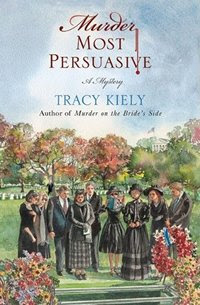 While browsing through the new releases at my library, I came across this title and immediately wondered if it was a modern Persuasion retelling. After reading the synopsis, I knew it was and as a long-time Austen fan, I thought I would enjoy this so I snatched it up.

And I did mostly enjoy this. Main character Elizabeth Parker has aided in two previous murder investigations (see the previous books in the series) and fancies herself somewhat of an amateur detective, perhaps along the lines of Golden Age detective Adela Bradley. She is also a huge fan of Jane Austen and is always quick with a quip, providing for some of the most entertaining lines of the book.  The Persuasion subplot comes in the form of her cousin Ann whose ex is now the police detective investigating the murder that is at the center of this book.

The writing style was easy and I read this book very quickly. There is a good cast of characters with distinct personalities so I never confused anyone with anyone else. Nor was I able to solve the murder with its many pieces. The threads of the mystery were a little confusing although I guess that is partly the point. There are several pieces that seem to be unconnected as the murderer seems to be trying to make them be, to cast suspicion on anyone but him/herself. I do think we could have had a few more clues about whodunnit but maybe other readers thought we were given plenty so that is simply a matter of personal preference.

Overall: I enjoyed my introduction to the world of Elizabeth Parker. I definitely want to check out the first two books as well as the fourth which sounds like it will be set in Bath at the Jane Austen Festival!