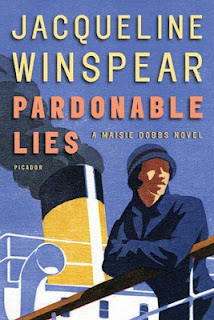 I've been eying this series for a while and recently decided to give them a shot. I usually prefer to start with the first but my library didn't have that available when I was looking so I started with the third. That may have been a mistake as there were several areas of Maisie Dobbs' character that frustrated me; my knowledge would have been supplemented by those first two books and perhaps I would have enjoyed this more.

This book is set in 1930 but the shadow of the Great War still hangs over everything from the men with physical disabilities sustained by fighting to those who never returned to those who can't escape from their dark memories of their time spent over there. All three are present in this as psychologist and investigator Maisie Dobbs has to face her darkest thoughts from her time spent as a nurse, seeking a man pronounced dead but whose mother never gave up seeking confirmation he lived and interfaces with several men injured on the field of battle.

Really three cases intertwine in this book. First is the aforementioned case of the boy declared dead whose mother believed him alive. Her dying wish was for her husband to confirm he lives; he wants nothing to do with the kid but asks Maisie to do a search anyway so that he can fulfill his word. Knowledge of this case prompts one of Maisie's friends to ask for Maisie to find the place where her brother met his death in France. Lastly there is a case in England of a young girl accused of killing her "uncle" (really, a pimp who met her when her cruel stepfather sent her away from home). And as one last item on Maisie's plate, it seems as if someone is trying to kill her. So there's a lot going on.

I thought Winspear did an excellent job juggling the different plots and even as I could see some of the threads coming together, I couldn't put everything in place, leaving me to marvel at how she did that. These mysteries had many delicate parts and they were handled with care. I liked most of the people we were introduced to over the course of the investigations.

But I was not a big fan of Maisie. I think if I had more of her background from the first two books, I would have liked her more. As it stands though, I thought she was a little odd especially with reference to her intuitive powers which just seemed supernatural and out of place in this work so grounded in painful emotional realism. I was also confused by her romantic relationship-I guess I'm used to something a bit more passionate than the feelings she has for the guy. Really though, I'd rather have her fully committed or involved with no one at all as it's not necessary for the story.

Overall: Interesting mysteries and plot but difficult to like main character for me. I will still try some more of the books to see if I can reconcile myself to Maisie's personality.

Cover: I like the art on this although the colors don't really work for me. That feels like an odd criticism but I just don't find them pretty enough, especially compared to some of the other covers.