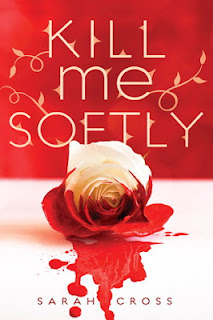 As a long-time lover of fairy tales and their retellings, of course I wanted to pick this book up and I was further prompted by Mimi valentine calling this her favorite book so far of 2012-when a blogger you love highlights a book for such high praise, one has to sit up and pay attention. My (very picky) sister also read this and said it was good.

From the start I was a bit confused as main character Mira does not live in a fairy tale world. Instead she has to run away to find the place and that is where the plot really thickens. She is searching for her parents' graves, seeking some closure with their death before she reaches her sixteenth year of age. But along the way she meets some odd characters, all of whom have similar birthmarks as her. As we discover, the birthmarks represent that the person has a specific destiny in a fairy tale. Mira is the Princess in Sleeping Beauty. She also meets (among others) the Prince in Sleeping Beauty, Snow White, Belle, the Beast, and assorted other characters in the stories. While they have this eventual destiny, for the most part they are just living ordinary lives waiting for the blessing or curse (however they consider it) to begin. This results in some humorous moments, my personal favorite probably being how the animals flock to certain characters. I just love picturing that and crack up every time.

Anyway back to the plot. Mira is immediately drawn to two guys who, it turns out, are brothers. One is Blue, a huge jerk, and the other is his older brother Felix, the smooth and charming guy. Their fairy tale fate is a big secret that Mira must unravel over the course of the book. I can definitely see why some people would find either or both of these guys charming but personally I preferred Freddie, her sweet Hero, because I happen to like nice men (and now I want to watch Star Wars).

There is a lot of time spent with each of the guys as well as the other fairy-tale characters. But you know what there isn't very much of? Mira looking for the graves of her parents. That is the whole impetus for her returning to Beau Rivage but once she's there, she almost forgets about it in favor of falling in love with Felix (she thinks) and bantering with Blue. Honestly I was disappointed that she allowed boys to get in the way of her quest for her parents even if in the end she manages to have both.

In between that though there is a lot of good talk about the implications of fate and destiny and if you can change yours. There are questions about family and how to behave and what you might sacrifice for the people you love. And there is a lot of looking at the dark side of fairy tales and life in general. While I tend to prefer a more humorous approach to fairy tales, I did enjoy this different twist on them.

Overall: A fairy tale retelling that does not shy away from the dark edges but instead confronts them and the challenges of escaping your destiny.

Cover: Really perfect with the rose and thorns although maybe some blue would have been nice.