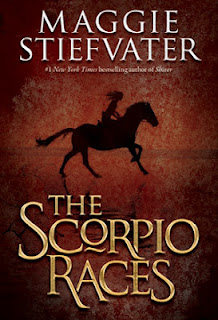 Having enjoyed Stiefvater's The Wolves of Mercy Falls series, I was eager to try out more of her work including the highly praised The Scorpio Races, which sounded incredibly different and unique. I feel like the mythology is definitely different from anything I'm personally acquainted with, being based on dangerous fairy sea horses and a climactic race that the whole book builds up to.

I don't want to share too much about the book because I enjoyed the unfolding of the plot. I would characterize this book as fairly slow filled with detail but occasionally punctuated by bursts of action or huge crowd scenes. As someone who appreciates the buildup, that worked for me but I know it is not to everyone's taste. After all this book is just over 400 pages. Admittedly I do think it could have been trimmed a bit but I pretty much liked every second.

The book is narrated in alternating chapters by Sean Kendrick, returning champion of the race who is racing for the opportunity to buy his beloved horse and gain more independence from the man who owns the horse and most of the island. The other narrator is Puck Connolly, whose parents died in the sea, leaving her with two brothers and very little money. She races as a last gasp to keep her family together even when she realizes its futility. Over the course of the book, they meet and fall for each other while also battling prejudiced old-timers, malicious peers, and the dangers of the horses themselves.

While reading, I felt immensely for both characters, caught in extremely difficult situations and with reactions very different from what I suppose mine would be in such circumstances. This made it a bit hard for me to feel connected but it didn't seem to matter in the moment. Now as I think back on the book, I'm not quite as enchanted but during I was enthralled.

I do have a confession to make though-for much of the book, I thought the race was from the main island to another island. For those of you who have read the book, you can understand why this was a little bit confusing especially in regards to who main character Puck decides to race. The race is actually on a beach very close to the sea.

Recommended for lovers of Stiefvater's writing and people who love horses with the caveat that there are some violent scenes.