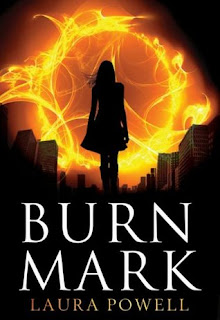 I haven't seen very much about this book around the blogosphere, which I would say is good as it allowed me to enter this book with very little preconceived notions, prepared to enjoy myself fully. What I did see left me happy as it seemed like a fun different twist on the witch story.

Basically it's modern times very similar to our world but in this world, witchcraft is very real and threatening. There is an inquisition in place to track down unlicensed and malevolent witches as well as a registry to keep track of confirmed witches. But not all witches are content to live like that with groups of them forming covens that are similar to gangs. Needless to say, suspicions are high and danger lurks around every corner. Witchhood usually starts in the teens or early twenties; the earlier it appears, the more powerful the witch will be. He or she will see a tiny mark appear on the skin.

The story is told mostly through alternating between two characters with additional sections filling in the gaps. One character is Glory, descendant of famous powerful witches, who fully anticipates becoming a witch and a powerful one at that who can lead her coven back to its days of glory. The other is her near opposite: the posh Lucas Stearne whose father is an Inquisitor leading an important prosecution. Both of them receive their marks on the same days and their paths soon intertwine to uncover a great conspiracy that threatens the very stability of the nation.

One of the cool things, for me, was that this book was set in London and its author is British. This meant there was quite a bit of slang that went past me (chav is something I've seen but is most definitely not American slang) as well as descriptions that helped create a distinctly British world. Most of the books I read are set during Regency times so it was also neat to see an alternate contemporary world. This world is fully realized; there are a lot of details packed in to this book and I feel like I can see exactly what Powell envisioned. While sometimes this was overwhelming, I love details so that aspect worked great for me.

Next I actually really liked both of the characters. Oftentimes, I end up preferring one main character vastly more than the other but I could not pick a favorite in this case. I loved Glory's toughness and her strong ambitions while Lucas underwent a stunning transformation in his thinking about witchkind because of his induction into that category. I would have liked a bit more about Lucas' difficult relationship with his father whose career is of more importance than his son but you can't have everything.

Overall: An exciting alternate world is displayed here with lots of possibilities for future stories; I, for one, am along for the ride. Highly enjoyed!

Cover: Kind of reminds me of Divergent actually with the big circle. I do like that it's dark with just the fiery hints but it's not exactly to my taste.