Along Came a Duke 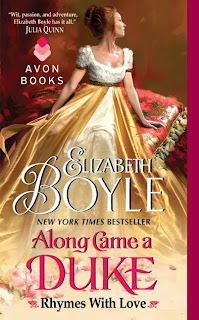 Elizabeth Boyle books are pretty much must-reads for me so the title, cover, and plot didn't really matter to me. I saw her name and that was sufficient. However if it did matter, I think the duke part would be very enticing. I once read that romance books with duke in the title sold better and I believe that; I know I like books when the man is of high rank, not that a mere mister can't be a good hero, of course...

Anyway on to the book itself: I suffered some confusion in the beginning just with the pacing and tone. On the one hand, there is Miss Tabitha Timmons, a confirmed spinster living with her cold uncle and aunt who assumed responsibility for her when her father died in exchange for a better position as vicar. They took the opportunity to improve their social standing while also gaining a free maid of all work. Yet Tabitha's spirits are bright especially because she has her two best friends Daphne and Harry. They are all spinsters and happily so in the small town of Kempton that is filled with many legends about the famous spinsterdom. Many names are thrown around but not all are important.

Then we meet her love interest, the Duke of Preston, although Tabitha does not realize this for a while. Because she does not know of his exalted status, she is fine lashing him with her tongue, immediately intriguing him. He is an awful rake, having ruined several ladies this season while also betting exorbitantly. My confusion stemmed from the relationships in his life. He has an aunt and uncle (twins) who are only about six months older than him as well as a friend Roxley. I was confusing the friend and the uncle, who I believe will be receiving their own stories with Tabitha's friends to complete the series (hopefully Preston's aunt will also receive a mate as she is widowed in this book).

The basic plot is that Tabitha must wed the eminently respectable Mr. Barkworth in order to inherit a sizable fortune. Problem is that she's in love with Preston and well he realizes he's in love with her. Tabitha's greedy relations will go far to keep Tabitha's inheritance in their hands but they are no match for true love.

Once I had sorted out the relationships in this book, I was enchanted. My ARC has a blurb from Julia Quinn that is just so true, "Wit, passion, and adventure, Elizabeth Boyle has it all." I loved the humor so much-I feel so in sync with Boyle because she always brings it for me. In particular, I enjoyed Preston's mocking of Mr. Barkworth. However the main reason I fell for both of the main characters though wasn't because they said some great lines; it was the way both suffered from losing their family and wanting to build one together. Serious tragedy in their pasts helps them appreciate the importance of family and gave them a very real connection. I appreciate the balance of serious with humor.

Overall: Perfect for fans of Julia Quinn and lighter romance-this is a humorous sweet story with two people eager for a deep connection and who have to battle base knavery to achieve their happily ever after.