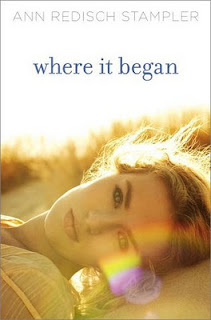 Where It Began by Ann Redisch Stampler
4/5 stars
Simon Pulse, 2012
369 pages
YA; Contemporary

The early buzz I heard on this was that the writing was really good while main character Gabby was...not. I wanted to sample the writing no matter what the plot so I requested it.

The first thing I noticed was that the chapters were pretty short (with 70+ total) and the writing style was easy. I was able to move quickly through the story meeting main character Gabby who is stuck in the hospital, unsure of how she landed there.  This leads us to flashbacks on Gabby's life before a makeover, after a makeover, and eventually her life after the accident.

Her first life featured her as a disappointment to her social climbing aspirational parents. Honestly her life during this period didn't seem that bad, to me. She actually had two good friends even if her parents sucked and she secretly hoped for popularity. At least she had those friends, her art and the promise of a future through that.

After the makeover, championed by her mother, she attracts the attention of golden boy Billy Nash, earning some level of popularity, her mother's attention and approval, as well as leading to her fateful accident.  Her life was consumed with Billy-everything revolved around him, without letting him know so that he wouldn't find her clingy. She knows she doesn't live up to his mother's standards but she finds herself irresistibly drawn to Billy and his bad boy, probation-breaking ways.

Then she wakes up in the hospital and cannot remember anything. It seems as if she stole Billy's car keys and crashed his car while drunk. But Billy loved that car-could she really have stolen it? What isn't she remembering? I was honestly shocked when I found out the truth; namely that Gabby was forgetting several key points and the other students all knew what she had forgotten. They assumed that Gabby was lying in order to protect Billy when she truly couldn't remember. I was just flabbergasted with how the entire student body knew that Gabby was so into Billy, she'd do pretty much anything for him.

And that obsession with Billy is definitely the hardest part of the book. The reader deduces much faster than Gabby that Billy is a jerk, unworthy of her time and it makes it hard to understand why Gabby can't figure it out.  I understood her position somewhat; he makes her feel desirable and pays her attention beyond what her previous contacts could.  But he was obviously unworthy and selfish. I can see why some reviewers could not get past that. Still I found the writing absorbing enough that I read through to the conclusion.

Content Warning: Language, drugs, and sexual situations with drugs being the most prevalent.

Overall: I found this to be a well-written contemporary that I imagine would appeal to fans of contemporary books. I would not necessarily recommend this as a book to get someone hooked on the YA contemporary genre though; it is not the best example.

Cover: Really not a fan of books where the model is staring at me; I find it creepy.