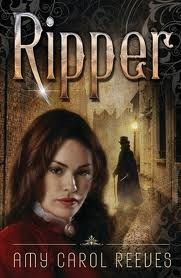 Lately I have found myself seeking out and enjoying stories involving Jack the Ripper. Due to the unresolved status of the case, there are lots of ways for the author to take the story. She can assign any murderer and motivation and bring in any details she chooses. Thus I entered this book with high expectations.

Main character Arabella lives with her grandmother in London after the death of her mother. Said grandmother is determined to provide Arabella with the "right" kind of lifestyle and encourages her to volunteer at Whitechapel Hospital for a week, taking care of prostitutes and their children. That is exactly the kind of life Arabella enjoys to her grandmother's dismay and Arabella also hopes to pursue a medical career. But her fear is heightened when several former patients of Whitechapel are discovered brutally murdered by a killer who earns the name Jack the Ripper.  I really enjoyed the historical aspects especially the looks at Victorian attitudes toward sex, violence, and charitable actions.

But I had two areas of concern, which unfortunately played big roles in the story and meant that I finished dissatisfied.  One aspect was the romantic plot lines. Early in the story, Arabella is introduced to two different guys who are pretty similar. They are both young doctors working at Whitechapel Hospital with interesting social connections (one upper-class, the other affiliated with the Pre-Raphaelites). I had so much trouble telling them apart so I was not invested in Arabella's struggle. She definitely prefers one over the other and I just couldn't bring myself to care.

The other main area was the introduction of some paranormal elements. I don't want to go too in-depth since this is mostly saved for the ending and would be full of spoilers for you. But I find the mystery of Jack the Ripper so intriguing that I didn't feel the paranormal elements added much. And while there are some terrifying sections, I found the pacing pretty slow especially in the beginning which made it hard to keep my attention on the story.

Overall: Some strong historical aspects but the paranormal felt unnecessary to me.

Cover: I'm not really a fan of the girl staring out at us although I like the coloring, which seems dark and mysterious befitting a story featuring Jack the Ripper.