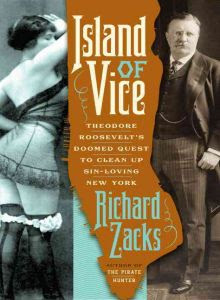 This is a hard review for me to write because I do not read much non-fiction. And most of what I have read in the past years was for academic research, not for fun. While I could produce an academic paper on this book, that would be decidedly not fun and it would not fit the content of my blog and general review style. But I still would like to be informative so here's my attempt :)

I was attracted to this book due to the presence of a certain Mr. Roosevelt, aka my favorite president and inspiration for my user name. 1858 is his birth year and TR was also a voracious reader, although I expect he read much more non-fiction than I did. This book covers the years of Roosevelt as a police commissioner on a mission to rid New York City of its vice, something that the people of NYC don't really want to do. Sure they don't want murderers, destruction of property, or burglaries but drinking, gambling, and prostitution were immensely popular activities and corruption within the Tammany Hall dominated police force was rampant.

Spurred by (mostly) Republican, native-born, wealthy Protestants though a crackdown on vice began enthusiastically by Roosevelt. As the city resisted reform though, Roosevelt began looking for an escape, which he found as Assistant Secretary of the Navy in William McKinley's cabinet on the way to the presidency.

As you might have guessed, I was most interested in the parts with Roosevelt, which made the beginning difficult as he is not really present. First we need the reformers to start agitating but for me, it was a slog. Happily Roosevelt is such a dynamic presence that once he arrives on the scene, the book picked up for me. Still as someone now more used to fiction, I found this book difficult to read.

But the information provided about Roosevelt's stint as police commissioner was fascinating. It is not a period of his life I've studied much, preferring his governorship and presidency generally, so the information presented was new to me while also demonstrating how this period of time laid a lot of groundwork for Roosevelt's future success. He certainly refined his speechmaking abilities and we see his rigid combative self that would continue to impress and enthrall us.

Overall: Definitely a great read for those interested in TR or late-nineteenth century New York City/urban centers but not a must-read in any sense for those who are not.