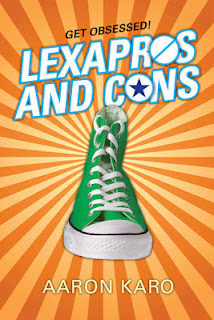 This book caught me very off-guard from the opening sentence, which may be realistic for the life of the average teenage boy but is also very different from what I usually read. However I persisted and found myself charmed.

Main character Chuck Taylor has a few issues. Well, more than a few, such that he could be classified as having OCD. One of his main compulsions is checking if the stove is on or not and getting up in the middle of the night to pee. Another one is pairing his massive collection of Converses (Chuck Taylors) to his mood. The beginning of the book has Chuck coming to grips with the fact that he does have these compulsions and getting him to a psychiatrist for treatment. A new character is also introduced, the lovely Amy, who Chuck is sure would have no interest in him.

Chuck ends up becoming pretty single-minded in his pursuit of Amy, alienating his long-time best (and pretty much only) friend. Then his compulsions cause him to seriously hurt Amy's feelings, jeopardizing any future relationship. This is his ultimate impetus to start tackling his problem and the progress he makes is tremendous, culminating in a senior year camping trip with several story lines overlapping.

Throughout there is some seriously snarky humor. I especially enjoyed Chuck's sessions with his therapist who has a tendency to end her sentences with a question mark instead of a period. And I liked seeing Chuck struggle but ultimately overcome. He ends the book in an optimistic frame of mind and that always makes me happy :)

Warning: Vulgar language and sexual content may make this inappropriate for the younger YA reader; if possible, definitely read a sample.

Overall: A pretty funny contemporary novel featuring a boy and his Chucks.

Cover: Wow-the mix of orange and green is bright! But the green Converses are part of the plot so I must give points for the accuracy.