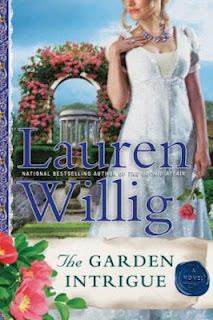 I have enjoyed the Pink Carnation series since the start, especially the last few titles, particularly The Orchid Affair. Like that book, this one is set in Napoleonic France and of courses continues to involves spies. But the Pink Carnation and her crew are not at the center of this book although she does play an important role. Instead our focus is British secret agent Augustus Whittlesby, who writes the most execrable verse to use as code conveying important secrets and Emma Delagardie, an American widow with close connections to Napoleon's family.

Whittlesby has spent years in France undercover and is starting to tire of the role. He would like to make a change and perhaps form a real attachment to his muse Jane Wooliston, also one of his contacts. But he first has the opportunity to find out some important information about Napoleon's future plans by partnering with Emma to write a masque. Emma meanwhile is also struggling with her role. Her American mother wants her to return to the States and settle into the warm embrace of her family. But she still has commitments to her husband's estate in France even as she is uneasy with the new power shifts (Napoleon is claiming the emperorship for himself).


But as the pair writes their masque, they draw much closer but their relationship is not without complications. Augustus began their friendship under false pretenses, taking advantage of Emma's history with Napoleon's stepdaughter to gain useful information. And both are hiding behind frivolous masks that cover a genuine warm personality. They need to break through and come together to secure a happy ending for themselves. And it was delightful while reading. However I ended up preferring the present-day sections, which is not always the case.

This time I really loved the "present-day" (it's actually 2004 in the book) sections featuring Eloise and Colin residing at his ancestral home Selwick Hall. They are putting up with the inconvenience of hosting a film crew due to his jerky stepfather/cousin and spineless sister. Eloise also experiences a conflict that mirrors that of the book: return to her native land America, explore new frontiers on the continent, or stay with the swoonworthy Brit (I may be rooting for the latter option for Eloise as I did for Emma :)

Overall: Another strong entry into the Pink Carnation series with a lovely romance. If you've read the previous books, you'll definitely want to pick this one up.