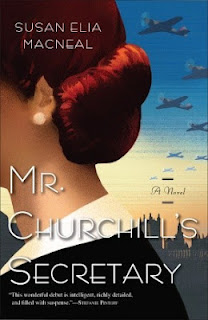 This book caught my interest for two main reasons. One is the subject matter: WWII Britain, a fascinating time period. The other was that it was touted as a read-a-like to Laurie R. King's Mary Russell mystery series, Rhys Bowen's writing, and Jacqueline Winspear's Maisie Dobbs series. I love the first two and am interested in trying Winspear with the expectation of loving it as well. So I entered this with high expectations.

I was quite swept away by the main character Maggie Hope, an orphan who enters into the employ of Winston Churchill, newly seated Prime Minster of England as they face the threat of Nazi Germany bearing down on France. Maggie is definitely a heroine I can support: she's very smart (top of her class), funny, loyal, feminist, and all around a cool lady. Pretty much everything I learned about her made me like her more and more. Unfortunately the book does not just focus on her, bringing in a lot of other information.

For example, sometimes it seemed like the author included extraneous information just to show how she had done her research. This is especially noticeable in the beginning when I was trying to get into the story. Then, as if WWII were not enough, the main subplot is about an IRA conspiracy with a three pronged attack on Britain. But there is also Maggie's feminism, agitating against sexist male superiors who consign her to a typist position despite her brains and qualifications for other work. And Maggie's twisted family history, a thread which I imagine will run throughout the series. Also a bit of romance although not enough for my taste. I understand that this is an introductory book (and I definitely want to read more!) but it felt a bit overwhelming.

Overall: A satisfying debut with a very promising main character, someone I definitely want to know more about!