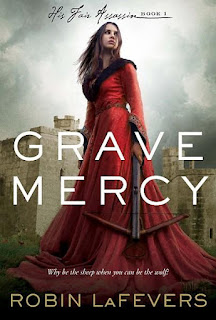 This book has received an amazing publicity push as I have seen it reviewed on a ton of sites, almost universally positive. People have really taken to this book. I see two great things about this: 1. Hopefully more people committing to tackling chunkster books as this book is quite long for YA and 2. More interest in historical fiction and historical fantasies, genres I love but yet ones that don't seem to get the attention that paranormal and dystopia does. I would love to see loads more reviews of YA HF in the coming months, prompted by people's love for this book.

Unfortunately for me, I read a lot of reviews beforehand and I had crazily high expectations. While I enjoyed this book a lot, it couldn't quite live up to all the hype. This serves as a lesson for me and I have avoided reviews for a few other books that I am anticipating this year in order to better manage expectations. Still overall I thought this book was great and very enjoyable.

A simple plot summary is that this is set in late 15th century Brittany, a sovereign country attempting to fight off the encroachment of the rapacious French. It is a difficult time with war everywhere and loyalties ever changing. Anne, duchess of Brittany, is only a child (by our standards) but her choice of husband is the main question on everyone's minds. Political intrigue abounds.

But this book does not focus on these historical figures, introducing us to someone entirely new. She is Ismae, daughter of Death who has been trained in a convent to be a deadly assassin working for Death, known as St. Mortain. As part of her first assignment outside of the convent walls, she is assigned to work with the mysterious Duval, posing as his mistress in order to discover who is betraying Anne and threatening Brittany's future.

Obviously I don't want to go too far into plot spoilers but I think this gives you a taste, hopefully enough to tempt you if you have not already procured a copy for yourself. Now I love world-building and historical writing so I found all of those details in the beginning absorbing. I know some people found it slow going but it worked for me. I was definitely a little confused by all of the people introduced but found that it was easy to keep the main characters straight in my head.

Other than the historical elements, we also have the fantastical part, which is related to the special powers Ismae has inherited, ones that make her uniquely qualified for her position. I loved seeing Ismae develop and discover more. She grew up in a broken, hateful home but finally begins to find her own place in the world with a purpose and a man she loves.

Speaking of Duval, I was really hoping I had found a hero that both Small Review and I really loved because we seem to have diametrically opposed feelings about male characters. He started off fine but he never really had that something extra special that makes me swoon. I love his sense of honor and loyalty as well as sense of strategy and tactics that make him a fearsome opponent. I enjoyed seeing Ismae find love and peace in his arms. But he's not my hero.

Another positive of this book is the resolution. Although there is a planned sequel, it will focus on a different one of Death's handmaidens as well as (it seems) one of my favorite characters from this book who didn't receive much page time. Ismae's story is basically concluded, making this reader very happy.

Overall: Yes, everything was pretty great but the hype overpowered the book for me.

Cover: I am so used to seeing just the thumbnail of this book, which makes it hard to distinguish the crossbow. That element is what really makes the cover though; otherwise it's just a medieval maid standing there.