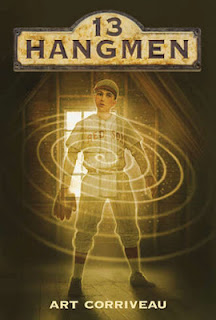 I did not know anything about this book going in to it although based on the title, I was kind of expecting a creepy read, possibly something fantasy revolving around hangmen. Well, that is not it. In fact, it is something better, weaving together lots of little historical moments into a big mystery.

The beginning is a little slow as everything is set up. Tony inherits first an authentic Ted Williams Red Sox cap and then his great-uncle's house on 13 Hangmen's Court in Boston. He, his historian father, mother, and twin older brothers thus move to their new home only to uncover a variety of problems. The house is not in good condition and the father is accused of murdering the uncle by pesky neighbor Hagmann.

However Tony uncovers a secret. When he places the cap on a symbol in his room, he can commune with his great-uncle in 1939; both boys are 13 and share the connection of the hat. As they talk, they learn about how the family Hagmann has been trying to get their house for generations and end up talking with other thirteen-year old boys who owned the house under the same unusual circumstances as Tony, revealing every time a little bit more about the mystery of the house as well as a peek into American history through one of its most important cities.

While I was a little skeptical of this book, I quickly fell in love and flew through it. There are so many aspects I love: awkward boy struggling with his weight and fitting in with his family, love of mysteries as Tony gets the opportunity to try to solve an actual one, and of course American history as we get to go all the way back to the time of the American Revolution.

As a middle-grade novel, I thought the writing was on a simpler level than perhaps a YA novel would be. This is not a bad observation; in fact, I think it helped me to read this as I was just drawn into the world. And I did think the writing had some interesting concepts, particularly in its use of history, showing how different ethnic groups moved through the neighborhoods as well as our connections to others through objects. Throughout I was wondering if all of the history presented was accurate; happily Corriveau presented an engaging look at separating his story from history.

Overall: A really fun melding of some of my favorite subjects: mystery, American history, some baseball, and family!

Cover: Wow-another cover that matches! Baseball is very relevant as are the spirals.