The Mapmaker and the Ghost 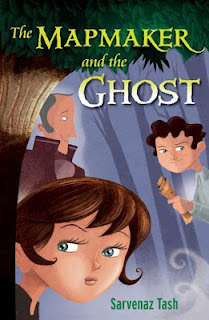 In an effort to tame my tbr list, I have tried to become increasingly picky and I confess that while interested in this, I originally skipped over it on Netgalley in order to focus on YA titles. But then I saw that Small Review had gotten it (she's a bad influence ;) and I decided that I must read it too. So requested, read, and loved it!

The main character intrepid sixth-grader Goldenrod, so named by her garden-mad mother, has a deep love of maps as well as admiration for explorers Lewis and Clark who passed through what is now her hometown during their expedition. For a summer project, Goldenrod decides to make a map of that town that will include absolutely everything. She can present this to her best friend, who had to move away, and it will help occupy her time during her summer vacation. Of course, it would be better to explore brand-new territory entirely but this may be her best chance for adventure.

Until she sets off on her quest and discovers: a mysterious old lady who tells her about a rare species of rose, the ghost referenced in the title, and a gang of young hoodlums, for lack of a better word. Despite the "civilization" in which she resides, it seems like Goldenrod will be able to have an adventure after all!

This was such a cute book, leaving me absolutely charmed. Goldenrod is a fun kid; I appreciate her offbeat interest in maps and her dedication to doing right during her encounter with the gang. She has a sense of humor and is good to her family. In short, Goldenrod is an excellent main character. But she is joined by a quirky cast to supplement the charms. I especially enjoyed the ghost and Goldenrod's younger brother who idolizes his older sibling, as he ought.

Overall: A sweet and delightful story that is sure to capture your attention-great for a lazy afternoon read!