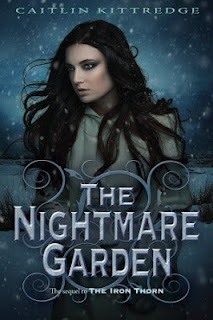 The Iron Thorn was a surprise favorite from last year so I was very excited to pick this up. Unfortunately, due to poor planning, I had a huge stack of review books to get through first, meaning that this book has been staring at me for too long before I finally picked it up to read. Of course, it had also been about a year since I read the first one which mean that it took me a while to get back into the groove of the characters and the story.

While I remembered the uniquely named Aoife, I couldn't entirely remember the circumstances in which we last saw her. That made the beginning pages a struggle especially as I could not remember Conrad, who as Aoife's brother is actually an important character. Happily as the book progressed, most of the first book returned to me while Aoife's adventure in this book developed, giving her purpose and the book its own plot within the larger framework of the series.

That plot is Aoife's search to fix the damage caused by her opening the Gates in her world and specifically to find her mother who was lost in Lovecraft. To save her mother, Aoife would do almost anything, something I identified very strongly with. I would go to great lengths to protect my family and face the same things Aoife does.

However as the book progresses we focus almost entirely on Aoife. Understandably since she is the main character but sadly to me because I really liked Dean and Cal in the first book while they are almost entirely sidelined in this book. We also meet some new characters who do have bigger parts, most notably to me as Aoife's almost stepmother Valentina and the intriguing Rasputina, who gives Aoife a lift when she needs one.

Overall: I didn't like it quite as much as the first book but I wonder if that would be the case if I had saved them to read one right after the other. I bet that would have helped me to keep everything on track.

Cover: I don't think she looks quite human here; I guess her Fae side is being pulled out more but it looks really weird to me. I do really like the blues used though.