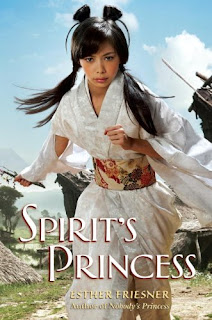 I wasn't really sure what to expect with this book although I knew that it was based on a real-life historical figure, known as Himiko, in ancient Japan. That is not a time period I am familiar with so that meant that everything would be new to me.

Now I don't know if it was because of how new everything was or what the reason might be, but I really struggled to read this book. That would be mostly because of the characters. I could not get a feel for the young Himiko and none of the other characters really interested me. Honestly I thought Himiko was kind of a brat, quick to anger and selfish.  Most of her mishaps come from her bullheadedness and inability to listen to people unless they told her what she wanted to hear.

The setting was fine. Himiko is the only daughter of the chief of a secluded clan (not sure how big they are though they must be of some size) and somewhat spoiled. She desires to be like her eldest brother and also finds herself drawn to the shaman of their tribe. Through these twin desires, she wanders through the book, which takes place over some years (not entirely sure how many but she goes from child to adult woman ready for marriage).

Saying that, there were some cool plot points that relate to the fantasy aspect. The shaman educates Himiko but Himiko also seems to possess her own powers that infused some magic into the story. The descriptions around these experiences were very intriguing especially the final one toward the end, which I think will help guide Himiko in the next book in the series. However I will not be joining them because I did not enjoy this book enough.

Overall: A different kind of historical fiction (we need more non-Europe stories) but with lackluster characters and a meandering plot that made it difficult for me to concentrate.