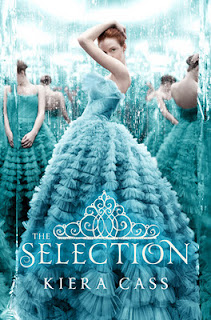 I honestly wasn't sure I was going to read this after the author's pique over Wendy at The Midnight Garden's awesome review but the concept kept calling to me and I am so glad that I did read it as it featured many of the things I enjoy in books. While not to everyone's taste, it really worked for me.

Basically in this dystopian future, America is chosen to compete with thirty-four other young ladies to become wife to Prince Maxon. While America has no interest in the position due to her love for the unsuitable Aspen, she grudgingly enters to benefit her family and finds out some surprising things along the way.

First, you really must ignore the names. I find them simply dreadful (and I only gave a small sample here). Once I trained my brain to blip over them, it was easier. I found the world building to be sufficient and the concept to be very attractive. The idea of groups of people gathered together to compete against each other is a very appealing one to me. It is a little like The Hunger Games as well as First Date, both of which I enjoyed and I've probably read other books with similar plot points. For people who like a lot of action, they will not find that here. But for people like me who enjoy reading about girls swanning around in pretty dresses as well as the machinations of a group of girls in competition against each other, this has a lot to offer.

What I didn't like was how this book kind of seems to be dragged out. Rebels with mysterious agendas against Illea have been attacking consistently on the search for something. I am really speculating that this story could have been told in one slightly longer book with some tighter editing. We shall have to wait and see. I also hated the love triangle. While Maxon and Aspen are both certain of how they feel about America, she has complicated feelings. I was not in sync with her; after the way Aspen treated her, I was ready for to become a princess. Maxon is not perfect by any means but Aspen's behavior was so low and I am not ready to forgive him. I found myself becoming increasingly frustrated with America over this issue.

Recommended for: people who loved the Capitol scenes in The Hunger Games. It also made me think of the movie Clueless, one of my faves although this book is definitely not as good as that film. I also thought it felt a bit like a fairy-tale, which is always a positive to me. I was just pretty happy while reading this and I devoured it so that is what makes this such a good read for me.

Not recommended for: People who want a lot of action and excitement or a gritty dystopia-you will not find that here.

Cover: I believe I've mentioned that I love pretty dresses, yes? I'm not entirely sure about the position though-why is her arm above her head? And her hair could be redder to more accurately match the character description.