Dying to Know You 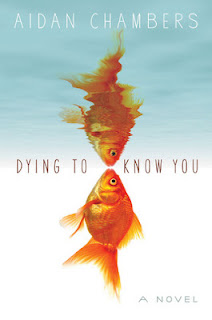 This looked like an interesting read so when I saw it pop up, I requested it. I didn't really know much going in but I ended up finding a lot to recommend it and to differentiate it from many other books in the YA category.

First we have a male narrator (yay!) but that narrator is actually an elderly man enlisted by the young male protagonist to aid in his courtship of a wordsmith young lady. Then it is set in the UK, not very unique but I mostly read books set in America or else historicals set in England. Reading a contemporary set in England is fairly rare. And third is the pedigree of the author. Chambers won the Carnegie medal for Postcards from No Man's Land, a book I vaguely remember reading many years ago.

The young male Karl who asks for help is a fascinating character. His years of schooling have taught him to think less of himself due to his difficulties with writing, a consequence of his dyslexia. The loss of his father at a young age also severely impacted him. But the lady insists so he goes to the writer, her favorite writer in fact.  But as the two meet up to work on this project, the writer discovers that he is getting as much from Karl as he is giving. Yes, he is sharing his power with words but Karl is giving the writer hope after the death of his beloved wife.

This book relies heavily on dialogue, something I love as it is generally makes for fast reading than dense paragraphs of description or *shudder* internal monologues. But in this case the rapid back and forth of the characters rarely had "said" or "told" attached, making it a little tricky to remember who was saying what. Of course it's not impossible, it just means I needed to slow down to appreciate what was occurring.

It's a quiet book without the razzle-dazzle action scenes of paranormals and fantasies. But it is not without its emotional power. Seeing Karl battle his demons and discover his strong, capable self was a true pleasure.

Overall: Thoughtful writing lift this story above the ordinary for a lovely reading experience.

Cover: Definitely not something that would appeal to me (given my penchant for pretty dresses and cartoonish covers) but actually relevant to the contents of the book, a big plus for YA!