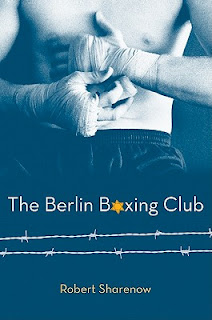 I originally saw this book mentioned on The Book Smugglers, which introduced it into my mind but I resisted checking it out at my library due to my lack of interest in boxing. However earlier I resolved to read more historical fiction because I adore the genre and would like to promote it more so I grabbed this off the shelf of my library.

Immediately I started reading and got through about a quarter incredibly fast before going back to my review books. I was so caught up in the story of a young Jewish boy named Karl Stern in the mid to late 1930s. Hitler is in power and the situation is just starting to get ugly as demonstrated by bullies who seek out Karl in the opening chapters.  However his parents think it may be just temporary and no one seems too concerned yet. However as the book travels through time (and it covers a few years, culminating in Kristallnacht, November 1938), tensions rise and Karl's danger is readily felt.

One aspect I worried about was the boxing element. I don't really like boxing and I thought it would be really boring. But it was actually pretty exciting. First because it doesn't dominate the book; there are lots of other story lines. Second because it was well-written and broad. Karl doesn't just box; he also undergoes intense physical training that is necessary to build his stamina for the ring. Additionally because of his background, he is filled with a strong urge to prove himself. His initially scrawny physique covers the heart of a champion.

Another fun aspect was the inclusion of cartoons as Karl is an artist. He would like to draw cartoons for a newspaper but his father doesn't approve of that; still he doesn't stop him. These sketches include stories Karl draws for his sister and portraits of boxers, those famous and those Karl faces himself. I love books with pictures and this was no exception.

Really there is SO much in this book: family, romance, sport, politics, art. It is a bit on the long side for YA but it utilizes its pages so well. There isn't filler though; there's just a lot that Sharenow wants to cover and he does it so well.  One of my favorite (although heartbreaking) aspects is that Karl doesn't look Jewish while his younger sister Hildy does, causing her immense self-hatred that Karl is sometimes too self-absorbed to notice. This relationship between the siblings is normally pretty strong but due to Nazi rhetoric, it is splintered. Not everything gets wrapped up but the story has a somewhat optimistic ending that shouldn't leave you bawling.

While an amazing book that I highly recommend, I did have two little problems. First I thought there was a little too much about Max Schmeling and his neutrality and inscrutability about the politics of Germany. I did really enjoy the Author's Note at the end about him though-very interesting. The other was that I had a little trouble following the timeline and figuring out how much time had passed. The book is divided into parts, each part stating what year(s) it covers but I still had trouble with how much time had passed between chapters.