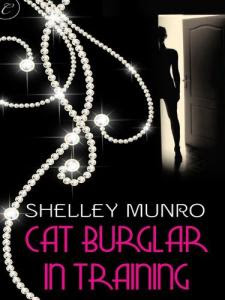 This book and I got off on the wrong foot because while reading the synopsis, I honed in on the word "viscount" and immediately fleshed out a Regency-era story. However viscounts still exist in the present day, which is in fact where this story is set. This is obviously one hundred percent my fault but it meant that I was disoriented and unsure of time period. Come to think of it, even after reading it, I don't feel entirely sure of the time period because although there were mentions of phones and social networks, something felt off.

Actually most of the book felt off with too much stuffed in for the book to reasonably contain. Main character Eve must take up cat burglaring, the family profession, as her father is just too old and injured to do it himself. Nobody is able to get an honest job it seems. They also have competition in the area and her father owes tremendous debts to a very bad guy who has no compunction about threatening Eve and her daughter and feels no shame in propositioning Eve in exchange for forgiving some of the debts. Then there is Eve's complicated relationship with her father and servants (?) Ben and Hannah, the Terrible Trio as she dubs them with alternating exasperation and love.

And that's just the start! There is also Eve's quest to discover the man who drugged and raped her, leading to the conception of her daughter six years earlier.  A new character on the scene is Kiwi cop Kahu, who just might be bringing Eve out of her self-imposed chastity and his own quest to discover who murdered his brother.

Just listing off the plot threads took up a considerable amount of time and the book itself had trouble juggling them.  I soon realized that Eve's efforts to discover her rapist was the most important thread but the other threads seemed to rise and fall in importance. I wish the romance had been a bit more prominent since this is a romance novel; Kahu seemed very intriguing but I didn't see them forming much of an emotional connection although the physical attraction was off-the-charts.

Additionally the setting was confusing for me; I guess I'm just not very familiar with the upper-class lifestyle but the schedule of these people didn't make sense to me. There were so many parties and other events and so little actual work.  People didn't seem to use their phones or computers very much despite having access to them (I'm not sure anyone owned a TV), although this might be because narrating their interaction with technology isn't necessarily very interesting.

Overall: The plot was not satisfactorily paced for me and I wanted more of the romance-ideally witty banter but just more scenes between the main couple would have been good.