A Waltz At Midnight 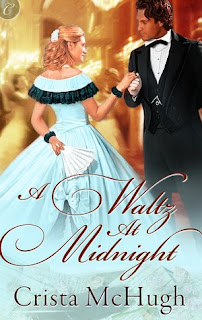 Sometimes you just want a quick jaunt with a sweet romance, you know? And that's what you get in this story. Unusually, as I am a Regency romance reader first and foremost, this story is set in 1866 New York with a country still hurting from the scars of the Civil War. Susanna is a servant in her aunt's boarding house near Vassar College, where she waits on various spoiled rich girls. One day Charlotte tosses aside an unromantic letter from a potential suitor and Susanna writes a curt response on her behalf.

Meanwhile Theodore Blakely chafes at his father's pressure to court Charlotte for the family gain. Her feisty response floors him and also draws him in. He thought she would be prim and boring but instead she's passionate and challenges him. As the letters continue, Susanna is wracked with guilt but interested in forming a relationship based only on the truth with Teddy. This culminates with a waltz at midnight at a masquerade.

As you can see, this is a very short story. But as a long-time lover of epistolary novels, the fact that much of the story is told through the couple's correspondence worked well for me. Both have deep scars from the war: Teddy fought while Susanna lost many in her family. And both share an interest in travel, wanting to see more of the world. Though short, the letters capture their similarities and showcase how they challenge each other. I especially enjoyed seeing how she confronted him and challenged him to be better because he had the ability to do so.

Overall: A nice fast read with two likable main characters-maybe could have been a bit longer but I'm glad it wasn't needlessly padded out to novel length.