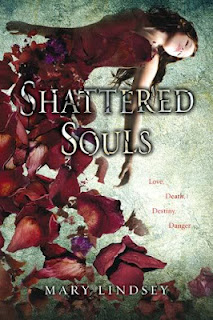 After seeing this cover, I fell absolutely head over heels in love and I was most excited to dive in to this book even despite my wariness of YA paranormal. Such wariness seemed justified as I learned more about the premise of the book while reading.

A young girl is informed that she is the reincarnated soul of a powerful paranormal figure; this news comes from her centuries old protector in the form of the hottest guy. However there are some changes from previous cycles. First she doesn't remember who she is and then it's been significantly longer than usual since her last cycle. Now I don't know what books you've read, but this plot reminded me very strongly of Angelfire, a book that I didn't like. However it was the main character who irked me there because I thought she didn't take her new role seriously and clung too strenuously to her "normal" life.  Happily that is not the case here.

While newly seventeen-year old Lenzi does have trouble believing the crazy things this guy Alden tells her and she seems to fall in lust with him immediately (although since I pictured him as my go-to YA guy William Moseley, I have no idea why this guy is in my head but he is also my Peeta and Will from Firelight, I did not blame her), she also embraces her role. That is partly because it convinces her that she is not schizophrenic like her father was and partly because it helps her begin to heal. She thought she was descending into madness and instead she discovers that she has tremendous powers to help the world.

I did find some of the descriptions difficult because much of it is mental and involves the concept of a soul. These aren't images for which I already have formed pictures nor are they something I think much about. Still I think I have a handle on what happens when Lenzi and Alden aid or confront an earthbound spirit. I also really liked learning about the agency that runs this, the ICDC. I like knowing there's an ultimate head of the group who presides over them with rules and paperwork (there is a lot of paperwork that needs to get done).

One last element I would be remiss to skip over is that at the beginning of the book, Lenzi had a boyfriend Zak. On the one hand, Zak is a decent guy who was basically Lenzi's only friend On the other hand, Lenzi desperately wants to avoid the fate of her father while Zak faces his demons the same way as his father (father died of an overdose and Zak drinks far to excess).  Alcohol fuels the worst side of Zak and puts Lenzi in danger. Furthermore her close association with Alden as well as his consumption of alcohol turns Zak into a jealous crazed man who adds additional fright to the book beyond the spirits Lenzi must work with or fight.

Oh, I also forgot to mention one thing-this appears to be a stand-alone! As of this time, goodreads does not show it to be part of a YA trilogy as Lindsey is working on a novel with a completely different concept. Sadly I kind of wish there would be another book but at least Lindsey has another novel in the works because I am very excited for it!