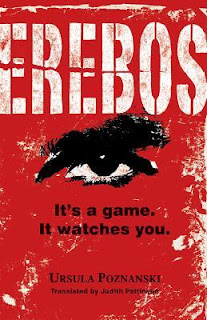 It's always fun to pick up a book that I haven't heard of before. I don't have any preconceived notions and I don't have buzz building up my expectations; I don't know anything about the author's writing and it means that I can discover a new favorite. In this case, I got to pick up something different from Germany, a YA novel from Ursula Poznanski (who appears to have written two other novels that have not been translated from German yet).

It starts out with sixteen-year-old Nick seeing his friends fall under the sway of something very secretive; he's dying to know what it is and soon enough he is inducted into the secret. It turns out it's a game called Erebos. Erebos has some unusual rules: you must always play alone, you must never talk about the game, and you must never tell anyone your real-name in the game nor your nickname to any one in real life. Those who play are drawn in, playing to the point of distraction. Until one day when Nick is kicked out after refusing to participate in something wrong. That sparks his quest to figure out who is behind Erebos and for what purpose.

On the surface, the book doesn't seem to have many thrills just as the game doesn't sound all that exciting to me. Admittedly I'm not a gamer as I've always found books more enthralling so I don't really get the obsession with Call of Duty and the like. Still the descriptions in this book captured me. I mean, sometimes they were just walking around in the game and yet I could barely put it down! It helped me to understand a little bit how addictive games can be.

Then Nick gets kicked out, which is mentioned in the synopsis but which I had forgotten making it surprising, and the tension really ratchets up. He tries to find others who have been kicked out so that they can join together to figure out who is behind this game. This also led to the introduction of my favorite character Victor, a gamer and very intelligent guy whose knowledge helps focus their research. I had no idea what was behind everything and I'm not sure there were entirely enough clues for people to figure out although since this is more of a thriller than a mystery, I think that's okay.

Overall: A surprisingly enthralling read that was difficult to put down.