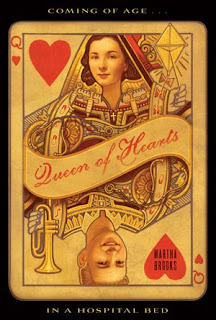 While browsing through my library's shelves, I came across this book. I love the title but wasn't completely sold on the idea of WWII happening while the main character lingers in a tuberculosis sanitarium-could that be interesting? It sounded very static. But it is also short, which is sometimes a deciding factor for me.

Actually the sanitarium was rather interesting and where the book picked up for me. Before that it was meandering with Marie-Claire's difficult life. Her family isn't well-off and she works very hard to contribute to their farm along with her brother and sister. Her itinerant uncle comes back to town and soon all three children are infected with tuberculosis; they join their uncle at the local sanitarium, separated by age and gender.

Although Marie-Claire is separated from her family, the sanitarium begins her journey in making a new one of TB survivors including her roommate Signy.  Signy has been in the sanitarium for a while without making much progress and is not Marie-Claire's ideal roommate, being rather perky and coming from a wealthy background. However they do have their disease in common and as they spend most of their time in the same room, they are able to bond. Although this part is better, it still didn't have much depth. I wanted more insight in to the characters, richer world-building, and more action.

Although the story is set during WWII, that doesn't play much of a role. The sanitarium is so remote and difficult to access that the news does not impact their lives nor do they hear much about the outside world. The biggest connection is the letters that both girls exchange with soldier boyfriends and even that tapers off as the boys find girls who don't have TB.

Inspired by the author's real-life experience with sanitariums, this is an interesting concept. However I didn't feel much forward progress and I didn't fall in love with any of the characters. This keeps me from wholeheartedly recommending the book unless you are a sucker for medical stories and think the tuberculosis angle sounds intriguing.