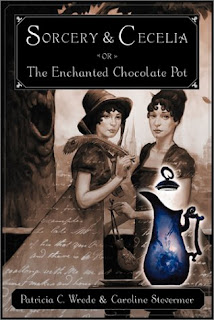 I guess I was on a bit of a historical fantasy kick as I've been meaning to read this for ages but only finally managed to pick it up from the library. Told through letters exchanged by cousins Cecelia and Kate who are separated for the Season, we enter an enchanting Regency world of magic.

Cecy and Kate are trouble-makers, no doubt, as well as curious, intelligent young ladies. Thus even though they are separated, they are still able to become embroiled in related adventures as well as discovering more about their own family and finding romance.

Kate is the one who gets to go to London along with her beautiful sister Georgina. While attending a new wizard's entrance into the Royal Magic College, Kate is almost killed by a witch who thinks she is actually a guy masquerading as a woman. When Kate meets that man, she ends up agreeing to be his fiancee for a season in order for him to confound a magical plot. Meanwhile Cecy in the country is discovering her own magical abilities and endeavoring to teach newcomer James Tarleton how to spy on people, as he is most wretched at the work.

The beginning was difficult for me as I struggled to figure out all of the relationships. Although Kate and Cecy are well-established as cousins, their other relations are less clear.  Once the book began to assume those relationships were settled and moved onto the magic and romance, I was far more charmed. I did prefer Kate and James' romance but this is apparently a debated point among readers of the book.

At the end, the authors share how they were inspired to write this book. Apparently it is based on an old game and the authors barely consulted each other as they wrote, each allowing the next letter to be a surprise. I love getting a tiny glimpse into the creative process. Some parts did seem a bit rough, evidence of the way it was written but still perfectly readable.

Overall: A delightful read with a premise and setting I just adored. The main characters are also wonderful.