Notes From the Blender 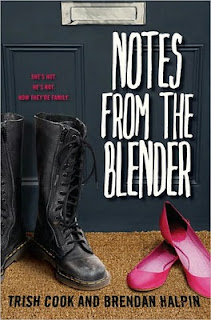 Notes From the Blender by Trish Cook and Brendan Halpin
Egmont, 2011
229 pages
YA; Contemporary
4/5 stars

I love the idea of a book cowritten (I'm thinking back to P.S. Longer Letter Later from my elementary school days) so I picked this up, hoping for a funny contemporary.  It actually ended up being more than I thought with its insight into familial relationships, friendships, and religion, the last a most welcome surprise. I love when secular fiction includes depictions of religion. This one features a youth group at a very liberal church (led by a lesbian pastor) as well as a commitment ceremony for a gay couple.

Dec and Neilly are at completely opposite ends of the popularity scale at school. She seemingly has everything while he listens to dark heavy metal and is generally ignored. He also happens to have a crush on Neilly while she doesn't even know he's alive. Each learns that they are going to become part of a blended family in singularly awful ways that is further compounded by the discovery that they will also be receiving a new half-sibling.

At the start, each character seems to fit a mold but as the story progresses, secret depths are revealed. While Dec listens to heavy metal, worrying his widowed father, Dec doesn't draw on that anger. Instead he finds it inspirational and works to make things better such as his introduction to veganism. Neilly is a popular girl whose gay father earned her a lot of scorn and who learns about really matters. They're both good kids and fun characters in this moving contemporary.

Warning: Language-lots of cursing and sexual references. Admittedly this did put me off. There is a lot of it, starting right at the beginning. If you read the first chapter and are displeased, I do not recommend you finishing this book. If these had not been included, I think I would have liked this more-just my preference for cleanness in books!