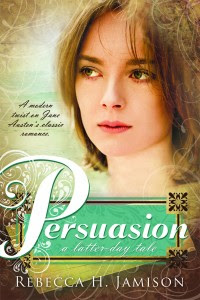 When I was browsing on Netgalley, I saw Jane Austen retelling and my mind went immediately to "must read." Thus I interpreted "latter-day" to mean modern instead of referring to the Church of Jesus Christ of Latter Day Saints. I was a little concerned going in to it because I'm not a Mormon; I'm Christian. I didn't want to be preached to; I just wanted to enjoy a story inspired by Austen, which is what I got.

I just have such a fondness for Austen that it can overcome most anything. Happily this book had its own strengths and didn't need much help. Our heroine is Anne who was engaged for about a day to a fine young man before being persuaded by her parents to break it off. Now he is a police captain and she is single, relied upon by her family and quietly helping even as they take total advantage of her.

There are a few big differences from Persuasion. Firstly Anne's mother is alive with an influential presence in her life whereas in the original, the mother is dead with Lady Russell serving as adviser. The other BIG difference I noted was the presentation of the William Elliott character. A wolf in snake's clothing in both books, this version has him becoming obsessed with and stalking Anne, adding a very frightening dimension to the tale. This also allows Frederick to be shown off to his best advantage as he plays the hero role perfectly, bringing in his police experience and supporting Anne through the ordeal.

Then there is the religious element. I think Austen's characters were probably Anglican, as I believe she is the daughter of a clergyman but religion is not a strong element in any of her books. Here though religion does play an important role. Anne is a convert to the Church of Jesus Christ of Latter Day Saints (I like typing out the full name because it makes me think of "Two by Two" from The Book of Mormon). In this version, Anne prays, she quotes Mormon scriptures, she attends functions, she wants a sealed marriage. Although it was a little jarring and I got the feeling the book assumed I was Mormon or was interested in converting, I didn't feel very preached to.

Overall: Quite enjoyable for those of us who eat up Austen retellings; perhaps not as humorous as the best of Austen is but a quick read for me.

Cover: The cover model has a bit of Keira Knightley to her in my opinion; I am in the pro-KK camp so that is a compliment from me although maybe I am just quick to cast KK in anything at all related to British period drama.