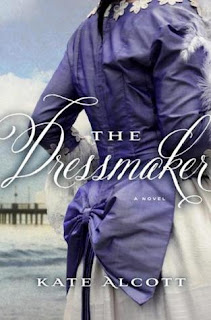 I was wary going in to this book because I saw some negative reviews. While I try to stay away from reviews so that I can have an unbiased mind (and hopefully no spoilers), I am not always successful. Happily I loved most of the story, in particular the events that drew from the actual historical record. What I didn't like though was the romance, which was lackluster and rubbed against my personal biases in a bad way. But let's start with the good.

The hook for this book is that it is about the Titanic, its sinking, its survivors, and a trial investigating the disaster-perfect for fans of the film and those wanting to honor the centennial of the sinking. It's a great way to get readers started on the book and to reveal a new angle with the trials afterward. I was not familiar with them and I bet most people are familiar with the film and not so much with anything.

The primary focus is maid Tess who flees her awful position and manages to win a place with Lady Lucile Duff Gordon on the Titanic. Lucile is a dressmaker and as Tess is an aspiring seamstress, it seems ideal. Until the fatal iceberg when Lucile and her husband Cosmo seem to have acted with extreme cowardice and an eager US senator's trials test everyone. Newspaperwoman Pinky Wade's superb reporting on the scandal and a love triangle for Tess complete the plot lines.

I had complicated feelings about most of the characters, alternately loving and loathing them (merely pages apart). Lucile is selfish, capricious, and manipulating but also fearful of protecting her hard-earned position and capable of generosity at times. Tess has big dreams but sometimes a fearful personality that might slow her ascent. The other characters are also complicated, revealing their many facets.

As mentioned, there are two love interests for Tess. One is Jim, a sailor, who testifies against Lucile and who is searching for a better life in America. The other is Jack Bremerton, an older Chicago millionaire, in the middle of a divorce; despite his age, I far preferred Jack. For me, Jim was nothing and not because on the social scale, he is nothing. Because his personality was lame and I didn't find him to be hero material. In my opinion, the heroine of a story needs a deserving mate and while Jack is not particularly deserving, I thought he was more so than Jim. That conclusion really spoiled the book for me even as I could predict it was coming.

Overall: A rich historical novel with vibrant character depictions that just didn't quite please me.