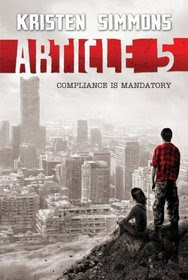 I was pretty excited about this book going in to it, having seen much positive buzz. I would definitely agree that this is well-written and gripping. I moved through it very quickly as the suspense was maintained and I was fascinated with the changing rules of the government, exemplified by the implementation of Article 5, condemning single mothers such as the mother of our main character Ember. When the soldiers come for them, it sets off the whole story.

But I am discovering what I do and do not like in dystopias although I suppose this is more accurately a post-apocalyptic as the government is strengthening its control rather than already firmly in power. I like believability and I feel like the governmental control over sex and women's bodies is frighteningly believable. I'm not entirely sure about the separation of mothers from their children though. That is a bond that is generally respected and extolled in American society. At the least, I would have imagined that Ember would have been placed in a nuclear family so that she could learn the "right" way instead of attending a reformatory school.

A second element I don't like is when the main character(s) is/are on the run. Obviously you need movement in a story but it seems as if I prefer emotional movement instead of characters fleeing. I just got tired of all of these new locations and the fact that they're never able to rest.  I don't know if that's just my taste in books (I mean, my favorite series growing up was the Baby-Sitter's Club and they stay pretty close to home although they do get to have adventures in new places) or if it's because I'm a homebody whose thoughts of home keep her going through the day. But the parts I liked most were the extended periods of Ember at the school and Ember in prison, movement within a more confined space. Of course there is another potential reason.

In neither of those examples was she with Chase. Now I am happy that there was not a love triangle. And Chase seems like a pretty decent guy, albeit one with significant issues stemming from the death of his family and time in the army. I found him inscrutable and not very swoonworthy-he doesn't have much of a sense of humor.  I bought that Ember was super in to him but I wasn't and as the reader, I feel like my opinion is pretty important too ;)

Not that I liked Ember all that much. I found her inconstant. She loves him, she hates him, she wants this, she wants that. I understand that Ember is under intense emotional pressure and maybe not thinking clearly but it came off as weak characterization in my opinion.  I was actually keeping track (in my head) of whenever she contradicted herself, which is not something I usually do despite the ability to do so frequently in YA books.

Overall: My indifference to the characters prevents me from loving this book despite its interesting concept and compelling writing. I am currently undecided as to whether or not I will want to read the next book.