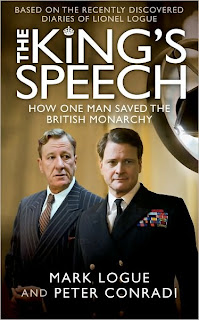 Source: Christmas present from my sister

Summary: The story of Australian commoner Lionel Logue, the speech therapist who helped the future King George VI, or Bertie,  overcome a speech impediment as well as their friendship.

Thoughts: I loved the movie so of course I was pleased to see the historical account of the men.  I know that movies often compress and distort a story so I wanted to read a more in-depth version.  Unfortunately I was disappointed with this book.

On the one hand, the book draws out the story instead of the somewhat compressed storyline in the movie.  It covers all of the years that Logue knew Bertie and how their friendship grew and continued to the end of King George's life.

On the other hand, the writing was very repetitive and the focus was a bit too narrow.  I would have liked more of a traditional biography of both men included, which would have made this a much longer book, admittedly.  Most of the points were repeated many times without variation and without adding anything to my knowledge.  There were also several editing errors, I guess because they wanted the book out for the holiday season and the release of the film.

Overall: If you are very, very interested in the film, maybe try this; otherwise skip.

Cover: Geoffrey Rush + Colin Firth = Awesome!
Posted by The Insouciant Sophisticate at 12:01 AM