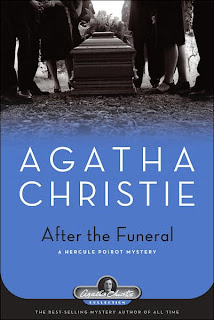 Summary: After the funeral of Richard Abernethie, his sister Cora posits the theory that he had been murdered, causing a ripple of shock throughout the gathered family.  The next day Cora is found, having definitely been murdered with a hatchet.  Presumably the same person did it but who can solve the mystery? Well the famous Hercule Poirot can!

Thoughts: What a puzzler!  The final conclusion was so startling and I kind of wonder if it could have been solved.  I really feel like one of the major clues was based on intimate knowledge of the characters' looks and mannerisms which it is difficult to gain merely through reading.  I had high hopes that I could solve the mystery since there were only about six possibilities for the murderer, by my count, but of course I didn't because of that pretty big twist.

There is not very much Poirot in the story.  Consequently I did not feel that he was very annoying.  He hardly spoke in his annoying French italicized words and he was often background as the Abernethie family spoke over him.  Indeed the bias of Britons against foreigners is seen in their reaction to the strange "Frenchman" (he is of course Belgian.)

One especially interesting aspect was the historical context provided.  Despite the year (1953), it seems like wartime rationing was still not over [eggs] which is difficult for me to comprehend as that year is among America's brightest.  The lack of quality servants is also bemoaned; additionally one character's hopes of running a tea shop was ruined by the onset of war.  The tragedy of WWII kind of hangs over the entire story in a very interesting way.

Overall: Average-not too much Poirot but the mystery was really interesting. Not recommended for the Christie newbie.

Cover: Of course I love these covers and this is no exception although that blue is not my favorite shade.
Posted by The Insouciant Sophisticate at 12:01 AM