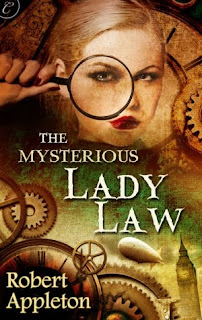 Summary: Lady Harriet Law has solved over 600 cases so when she offers her services pro bono to Julia to investigate the murder of her sister, Julia eagerly accepts.  But the solution offered is suspiciously pat and Julia with the aid of new beau constable Al Grant will investigate for herself the mysterious Lady Law in this steampunk novella.

Thoughts: I have been very interested in steampunk after seeing loads of reviews of awesome books so I hoped this would serve as another step into the world of steampunk.  I enjoyed what I read but felt that something was lacking.  I'm not sure if it was the length or the mystery but I was not completely satisfied.

I did love Julia, a dancer and waitress trying to make do with her sister in London and hoping for love who is terrified when she arrives home to discover her sister murdered.  She is pleased to make the acquaintance of Al Grant of the police who seems interested and might finally fulfill that hope of hers but she also wants to know why her sister died.  Lady Law's offer seems too good to be true.  When Julia is attacked later, she becomes even more frightened.  The action in the scene where she was attacked was a bit confusing; there was various machinery that was beyond my ability to picture.

The other part of the puzzle is Horace Holly whose protege was friendly with Julia's sister and who was also murdered.  As his path and Julia's intersect, they begin to figure out Lady Law and her (I feel) nefarious movements.  She has a very steampunk answer behind her ability to solve all of those mysteries.  However I was hoping for a different ending so perhaps therein lies my dissatisfication.

Regardless I would still recommend this for people looking for a quick steampunk read although perhaps not as an introduction.

Cover: I really like the cover-I think it's very beautiful with the airships and what I believe is Big Ben.
Posted by The Insouciant Sophisticate at 12:01 AM