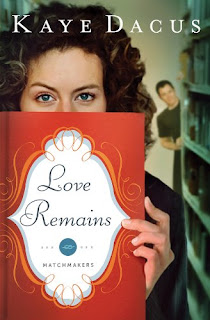 While this is a dreaded reunited first-loves book, I actually really enjoyed it. I usually find Kaye Dacus's books adorable and with characters that make me happy and this was no exception.
Zarah is as shocked as anyone when she sees her first love Bobby at a church singles' event.  They had shared a brief love when she was 18 and forbidden by her military father to date any enlisted men and Bobby was 20 and in the army.  They were separated by her father: Zarah thought that Bobby ditched her so as not to jeopardize his career while Bobby thought that Zarah chose college over him.  Each has not had any significant relationships since then but both are still hoping.

Of course they are constantly thrust together because they are active in the same church and their grandmothers are best friends.  In fact those grandmothers have decided to become matchmakers in order to ensure the birth of great-grandchildren.  Additionally Bobby's new job in Tennessee crime investigation brings him closer to Zarah because she is one the suspects.  Besides those factors, Bobby knows he still cares for Zarah and Zarah admits to the same.

The biggest issue separating the two is how her father interfered in their relationship initially and her own father issues.  Throughout her childhood, he constantly belittled her and destroyed her self-worth.  Probably my favorite part of the book was when God spoke to her and claimed her as His daughter. While her earthly father lets her down, her heavenly father will always love her and be there for her.

There is somewhat of a mystery as Bobby tries to figure out who has financial improprieties under his or her belt but it's not the largest part of the story.  Side characters provide additional fun including Zarah's friend Caylor who looks like she will be starring in the second book, The Art of Romance.

Overall: Another great read from Dacus!

Cover: Zarah does have big curly hair but I'm not sure this cover is the most accurate representation of the story within. I'm just not sure that I like the book being held by Zarah.
Posted by The Insouciant Sophisticate at 12:01 AM