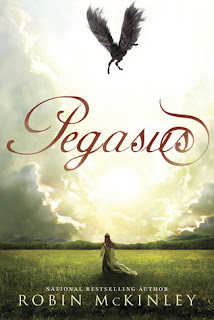 Because of a thousand-year-old alliance between humans and pegasi, Princess Sylviianel is ceremonially bound to Ebon, her own Pegasus, on her twelfth birthday. The two species coexist peacefully, despite the language barriers separating them. Humans and pegasi both rely on specially-trained Speaker magicians as the only means of real communication. But it's different for Sylvi and Ebon. They can understand each other. They quickly grow close-so close that their bond becomes a threat to the status quo-and possibly to the future safety of their two nations.  From Goodreads.

Thoughts: I am so glad that I read Allie at A Literary Odyssey's review which warns that the plot moves slowly because I would probably have dropped it.  It is so slow-I kept waiting for something to happen but there are only sporadic action sections and a lot more building a world through description.

A problem with those descriptions is when the pegasi attempt to describe things to Sylvi such as the caves which are really only understood through seeing and experiencing them.  I found the description useless in those cases and it only added to my boredom.  Then there was my confusion as the beginning of the story is Sylvi reading the history of her land before a sudden shift to the story proper.  Frequently the setting shifts between when she is 12 to when she is almost 16 without a clear delineation leaving me confused.

Some parts were great though.  I was very intrigued by the political manipulations; I enjoyed scenes with Sylvi's father King Corone and how he was negotiating against his opponents.  The parts between Sylvi and her pegasus Ebon were interesting as they share a special relationship.

But there wasn't enough suspense to sustain the story; just a lot of talking.  Ordinarily I do like "talky" novels but this did not do it for me.

Overall: So slow until the rapid cliffhanger that prepares the reader for a sequel.

Cover: Gorgeous-pegasi are magnificent and the landscape is lovely.
Posted by The Insouciant Sophisticate at 12:01 AM