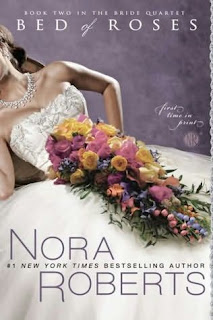 Bed of Roses by Nora Roberts
Berkley Books, 2009
335 pages
Romance
3/5 stars
Second in Bride Quartet
Source: Library
Summary: After Mac and Carter have announced their engagement, the ladies of Vows are thrilled to plan her wedding including Emma, in charge of flowers.  Of course, she would also like a wedding of her own but that will come in time when she meets Mr. Right.  Jack, an architect, is an old friend of theirs who has been around for a while and lately he's been thinking more intimately about Emma.  But will his commitment-phobic ways end them before they start?
Thoughts: I will try not to compare this book to the previous one (Vision in White) because I want to judge it on its own merits and each book could be read standalone without the context of the others.  Regardless I did like this book much less.
And that was mainly because of the main characters. I loved reading about the friendship between the ladies (and Mrs Grady) and about their business.  Of course this time there is a lot about flowers rather than photography this time.  We also see more about Mac and Carter from the first book as well as hints of the future romances.  One particularly annoying repeated phrase was how lucky they were to work weddings because of how happy the days are; this general idea was repeated so many times that it started to grate on me.
Now back to the characters.  Emma has parents with an amazing romantic love story and she wants the same thing.  While she has always been attractive to men, the main man she likes is Jack, an old friend of the girls.  I felt that neither character came off well in the story.  Emma has a hissy fit because she thinks Jack is too scared of the commitment that she wants (namely implying that he should have given her a key to his house after three months of dating and without asking for a key).  Jack is brusque with her, crinkling his mouth in displeasure if she so much as leaves a hairpin around his house and thus legitimately annoying her. I also didn't think he sounded very appealing.
Overall: Main characters general awfulness annoys this reader.
Cover: Beautiful flowers and dress.
Posted by The Insouciant Sophisticate at 12:01 AM