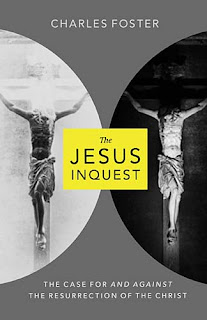 Source: Received a free egalley from Thomas Nelson via booksneeze.com in exchange for an honest review.

I hope I can review this book well because I am a very amateur scholar of Christianity.  Additionally I am a Christian so arguments against the resurrection do not sway me although I was very interested to read what the specific arguments were against.

Each chapter is divided into two parts as X argues against the resurrection and Y follows up with a rebuttal in favor of the resurrection.  Foster is a barrister in England and thought that this method would serve as a chance for X and Y to interact fairly.

The chapters trace the full resurrection sequence: death, burial, empty tomb, and post-resurrection appearances.  Each calmly argues his position, which is one of the best parts. I feel like if you watched a debate between a diehard atheist and a true believer, it could get virulent but as a book, it was more low-key and I had time to digest and consult the footnotes.

I was very interested to see the points against the resurrection because as a believer, it's not something I really consider.  Some of the arguments seemed ridiculous to me, ideas that were conspiracy theories and were complicated unlike the simplest solution (to me) of Jesus died, was resurrected, and then ascended to heaven.  The story is simple because it's true.

Overall: A well-written exploration of the resurrection: for and against the rising of Jesus Christ. Recommended for the curious non-believer and believer alike.

Cover: I don't think this cover would encourage me to read this book as I don't really like the black and white with the yellow box on the front.
Posted by The Insouciant Sophisticate at 12:01 AM