The Deeds of the Disturber 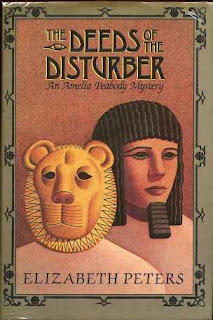 Although I read the first four Amelia Peabody books out of order, I was determined that I would read the rest as they were written.  When I was last at the library, I remembered to look up what the fifth book was called and luckily it was on the shelves.

This book is different from the previous because the setting is London rather than Egypt.  I really liked that change especially as I'm a bit of an Anglophile but not an Egyptologist.  Still I enjoy following Amelia, her husband Emerson, and their startlingly precocious son 'Ramses.'  Other recurring characters include Irish newsman Kevin O'Connell (who I quite adore), butler Wilkins, and Emerson's brother and wife.  New characters also appear: newswoman Miss Minton, mysterious woman from Emerson's past Ayesha, new butler Gargery who is quite in raptures over Emerson, and Amelia's niece and nephew plus more people intimately involved in the mystery.

That mystery begins when a watchman dies before a "haunted" mummy case at the British Museum followed by another death and the appearance of a man dressed as an ancient Egyptian priest to terrify the observers.  As always Emerson rails against Amelia involving herself but both set off on the track of the murderer with many amusing complications.  While I usually love the tone of the books, I found it somewhat overwhelming.  Amelia's writing, the story is supposed to be adapted from her journals, works best for me in small doses so I will wait awhile before I pick up the sixth book.

Cover: Um, it fits but I really don't like it.  The mask doesn't make any sense until almost the very end.
Posted by The Insouciant Sophisticate at 12:01 AM