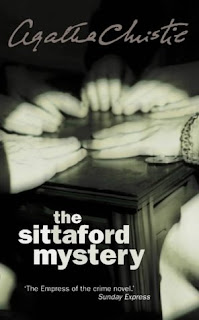 Summary: After a seance that predicts the death of Colonel Trevelyan, Major Burnaby journeys to his friend's house only to discover him dead.  His nephew John Pearson is soon arrested as the most likely suspect but his fiancee Emily Trefusis is determined to solve the mystery and prove him innocent.

Thoughts: When I think about Agatha Christie mysteries, I mostly judge based on two aspects: the solution to the murder and the characters especially the main one.  This Christie failed on both levels for me although until the end I was finding the story to be a very strong one.  I think that was because it was one of her earlier ones-from 1931 as you can see.

The murder solution was unsatisfactory because I really liked the murderer and I thought the motive was stupid although heavily foreshadowed.  I am also uncertain that there were really enough clues to understand his/her chance to kill the victim although again there was plenty of motive around.

I also did not like the main character, Miss Emily Trefusis who is engaged to the presumed murderer James Pearson and starts investigating to clear his name.  She is a manipulative, strong-willed young woman who I disliked as insincere and as wasting her time on an unworthy man.

However the other characters are very colorful such as the invalid and bossy Miss Percehouse, journalist Charles Enderby, voluble Mrs Curtis, and Inspector Narracott.  I did confuse a feel of them because they had less distinct personalities but overall I enjoyed spending time in Sittaford.

Overall: A strong mystery that is pretty good but I disliked some parts and that ruined it for me.

Cover: I was surprised to see a seance at the beginning although as they called it "table-turning" I was at first confused.  That seance is so important.
Posted by The Insouciant Sophisticate at 12:01 AM