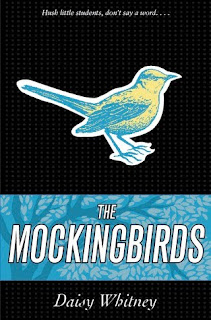 The Mockingbirds by Daisy Whitney
Little, Brown and Company, 2010
332 pages
YA; Contemporary
4.5/5 stars
Contemps Challenge
Source: From my sister

Summary: Alex wakes up naked in a bed with no memory of how she got there and a naked boy next to her. Her life at her beloved boarding school is shattered. Feeling she has no recourse through the school's administration or the police, she turns to the Mockingbirds, the hand of justice at the school.

Thoughts: I really loved this book.  Alex was a very sympathetic character; she loves piano and Beethoven and is a pretty good student.  She likes to have fun with her friends and her favorite ice cream flavor is mint chocolate chip just like me.  She did make some very stupid mistakes that led to the date rape and I was appalled by her behavior after, in that she didn't want to go to the police (see later paragraph).  But overall I liked her and it was easy to be on her side.  I liked seeing her friends and later a love interest who supported her implicitly even if they weren't as vividly drawn as Alex.

The part of the book that probably has most intrigued potential reader is the club the Mockingbirds.  The rules and regulations of the Mockingbirds captivated me.  The machinations within the club seemed very well-designed to avoid corruption, to preserve a system of checks and balances, and to implement justice to the aggrieved. Of course the name comes from To Kill a Mockingbird with the beloved character Atticus Finch's sense of right and wrong inspiring its founding.

The only part I didn't really like was because I was very uncomfortable with their system of justice: not including the school or police concerned me-I would have liked to see the students reaching out and trying to incorporate them in the process.  I have trouble believing that the school wants date-rape and such to occur there and Alex's insistence that the police not know about a crime really bothered me.

The author's note revealed that Daisy Whitney was date-raped herself.  I'm amazed at her strength in standing up for herself after it happened and to promote awareness through her writing.

Cover: Nice cover although I've seen better.
Posted by The Insouciant Sophisticate at 12:01 AM

Email ThisBlogThis!Share to TwitterShare to FacebookShare to Pinterest
Labels: 4.5, book, contemps, Daisy Whitney, Little Brown and Company, own, review, YA