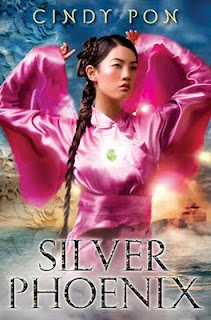 Source: Library-I was so happy to see that my library had the gorgeous original cover instead of the new, less attractive one.

Summary: Ai Ling ought to have been married by now but no one wants her, bringing dishonor to her family.  Later when her father has been gone for six months with no contact, she flees a bully and journeys to find him, discovering her own strength and purpose.

Thoughts: I really liked Ai Ling-she is smart, curious, and brave.  She leaves to find her father and when she comes across various challenges, she rises to them.  She fled because of a man who was trying to make her mother give him Ai Ling as a fourth wife in exchange for a supposed debt of her father's.  Two women alone are weak; in general Ai Ling is vulnerable being a lone female traveling. Another reason for leaving was her newfound ability to read people's thoughts, understandably terrifying.

Luckily she soon meets the (swoony) Chen Yong who rescues her from drowning.  He sounded hot!  But he was also smart, determined, and supportive of Ai Ling as she traveled toward her destiny.  I hope future books explore a romance between the two of them.

The main part I didn't like was the obstacles that kept appearing in Ai Ling's way.  There were just too many and it was overwhelming.  I know that part of the book is about all of those obstacles but it was relentless and somewhat unnecessary to the plot.  I feel like several of the incidents could have been cut without loss.  I also would have liked more historical context; the novel is set during the Xian dynasty, the first recorded dynasty in Chinese history and a fascinating time.  This reminds me that I need to read more non-fiction about China because it's so interesting and I just don't know as much as I would like.

Warning: Will probably make you hungry-Ai Ling is a healthy eater and there are many descriptions of the food eaten throughout the book.

Cover: Gorgeous-the pink is bright and eye-catching and the other colors are very beautiful too.
Posted by The Insouciant Sophisticate at 12:01 AM