Once Upon a Scandal 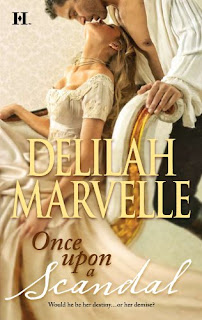 While this is the second in a trilogy, I believe it can be read standalone as I did without missing anything.

At first I wasn't sure how I'd feel about this book because it features a trope I don't like: boy meets girl, boy and girl are separated for years with him giving her no reason why-just that it has to be, boy comes back to discover girl is not receptive to his advances (because he was such a jerk!) but I didn't mind it this time.  First I was very invested in their relationship to start and second because Thatcher was very much in love with Victoria all of those years and it was well conveyed to the reader. Victoria's heartbreak was real but she was also using those feelings as a defense mechanism after losing her mother, her brother, and, slowly but surely, her father so I easily rooted for their feelings to accord once again.

That's not to say that I thought the journey would be easy. Victoria is essentially forced to marry Thatcher in order to retain her nearly 100,000 pound inheritance and she does not want to give him another opportunity to break her heart.  Thatcher is battered after his five years of service to brutal Venetians as a cicisbeo, a man who serves a married woman as champion, protector, lady's maid usually in a non-sexual way, and his poverty that led to that situation.  The practice sounds so bizarre to me but Marvelle mentions its ubiquity.  He is a complete romantic while she is more practical and I loved that combination.

In order to win her over (and I think he does manipulate her in order to do this), she must accompany him to Venice where she can meet his stepsister and her family and fall in love with the city as he has.  They will also have to confront the past especially his male pride when his former employer appears; I did not like those scenes. But of course everything works out so they can live happily ever after.

Note: There were several references to Napoleon that made it sound like he was still terrifying Europe, despite being set in the year 1829 when Napoleon was already dead. I suppose they could have been referring to when he was Emperor but the way the references were used made it sound more like he was still in power.  Has anyone else read this who can clarify my understanding?

A quote from their pre-separation times: "How could she not adore this man when all he continued to do was try to get her to adore him?" (page 52 of Netgalley egalley edition, October 29, 2010.)

Cover: I like the creamy colors but his head looks really ugly and that angle in general looks quite uncomfortable.
Posted by The Insouciant Sophisticate at 12:01 AM