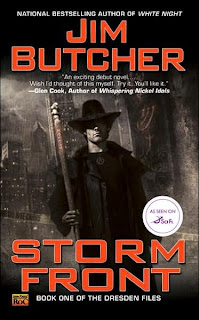 Source: Birthday present from one of my best friends-she had told me about the series but I hadn't gotten a chance to read them so she sent me the first one for my birthday.

Summary: Harry Dresden is the only visible wizard in the United States as most prefer to keep their abilities under wraps; thus he investigates all manner of paranormal activities in Chicago.  When such an event occurs making him the prime suspect, he knows he must investigate before the police and the council that oversees magic both catch him.  Furthermore he call tell that whoever did the gruesome murder used black magic, making him/her exceedingly dangerous and driven.  All in a normal week's work!

Thoughts: I thought this was a very easy, quick read.  There was a bit of everything-world creation, magic, romance, mystery, action, humor in the form of a skeleton named Bill who is also a repository of magic knowledge.  I really enjoy that in a story.

Unfortunately the characters didn't really connect with me.  Harry was the only well-drawn character, with the other people displaying very little personality.  While I am sure that more will be revealed about them through the other books in the series, the lack left me feeling unconnected to the story in general.  The female characters in particular were generic types  Also the story is supposed to be set in Chicago but I think it could have been in sent in any generic city; I feel like it could have been more evocative.  If you deliberately pick a city, I think it should be easily identifiable.

Despite the presence of many elements, they were also underdeveloped.  The magic world was a bit confusing with changing rules throughout; the mystery was almost easy enough for me; and since the female characters were lame, the romance subsequently sucked.  I did appreciate the humorous elements though.

I am interested in the rest of the series; also want to check out the TV series (on hulu.com) although I've heard it's not very good.

Overall: Fun escapist read but not outstanding-hopefully because it's the start of the series.

Cover: Accurate-seems very manly.
Posted by The Insouciant Sophisticate at 12:01 AM