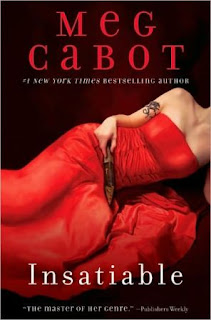 Thoughts: I used to adore Meg Cabot but the conclusions to the Princess Diaries series and the Queen of Babble trilogy deeply disappointed me so I took her off my auto-buy list.  But I thought this looked good-a vampire story featuring a main character who hates vampires-so I checked it out of the library.  Unfortunately I was disappointed.

The main source of disappointment was Meena, who rants against vampires and the stupid girls who fall for them.  Then she sleeps with a vampire and becomes one of those stupid girls who wants to protect her vampire lover.  She was so interesting at first.  She can see how people will die, she works as a dialogue writer for her favorite soap, and she tries to be a good person. But after he bites her during sex, she falls under his sway and pissed me off.  Admittedly I'm pretty anti-vampire to start but I hoped that something would make me love the story.  However Cabot's style is still breezy and readable which is how I was able to finish this book despite my outrage.

Despite my loathing of the main character, there were some secondary characters I didn't hate.  Meena's unemployed brother is living with her and he is psyched about the idea of killing some vampire butt; his enthusiasm is catching.  Her neighbors turn out to be vampires and they are enjoyable fun.  Then there is Alaric, a vampire killer and more than worthy mate for Meena; I wonder if Cabot plans to move in that direction.  The vampire Lucien was unimpressive to me.  He has to fight a vampire war while in New York City.  I didn't like him.

Cover: Eh, ugly tattoo but striking red.
Posted by The Insouciant Sophisticate at 12:01 AM